Today a Trailer from the Hercules:Thracian Wars was realeased and it looks AWESOME . From Dwayne Johnson’s interview he Teases a bit about his upcoming role in the DC universe. He’s tweeted about his talks with DC and they are going to move forward. They’d be fools not to. He breathes new life into Franchises. This guy oozes charisma. I’ll be the first one to say that if Dwayne Johnson is in it then I’m likely going to go see the film. He’s that much of a draw. When pressed for answers he listed three qualities he is looking for in a character

He holds back on saying the name until they get a writer and make an official announcement.  That leaves us to try and fill in the gaps. Who could he possibly have chosen?

Suggestions I have seen online have been Lobo, Black Adam, Green Lanter [John Stewart] . Personally I think The Rock will kill any role that he does. My leaning is towards a villian. Every superhero needs an adversary. It also gives him more room to be a “Badass Motherfucker” which is one of Dwayne’s requirements. 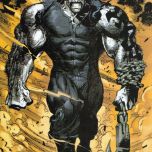 Who do you think Dwayne Johnson should choose?