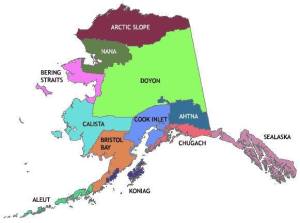 In 1971, Nixon signed the Alaska Native Claims Settlement Act into law. This divided Alaska in to first 12 then later 13 regional corporations. Handing over land title to these corporations to control the rights for its shareholders. supporters of the system argue that it has provided economic benefits for the indigenous peoples.  Apart from the climate this is one of the reasons that Alaska Natives have a slightly different perspective from Native Americans in the lower 48.