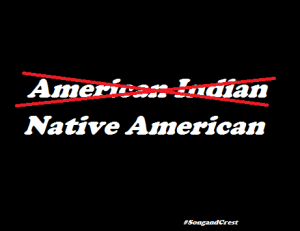 Native American [Native] is what I prefer my ethnicity to be referred as. I’m not so closed-minded as to think that being called American Indian is offensive, but I do think its misleading.

Over 500 years ago Columbus was trying to find an alternate route to India and failed. He was taken in by the Native Americans. Somewhere between the time that he landed and when he returned to Europe our Native american people were referred to as Indians. Which is confusing to those now immigrating from Southern Asia [India].
Our native american people were in their indigenous lands and have at least 565 names. Indians not being one of them. But the name has stuck. Hollywood and pop culture has kept the name and the imagery of teepee living, broken english speaking, 2-braided, bare-chested, horse-riding, war-painted, and don’t forget feather in the hair “Indian” man pervasive. While that may resemble some of the cultures. That imagery does not represent all of the numerous indigenous people of North america.
Now people are going back and forth about whether it is right for the Redskins to use the mascot and call themselves redskins when the name is offensive to so many people. Honestly, I don’t have faith that they will change soon. The Washington Redskins have been around for less than 100 years. Here we are, over 500 years later and still calling our people by the name that we were mistakenly called by a guy that was lost and in need of some help.  So please, for clarity’s sake. When it comes to generalizing about indigenous peoples if you don’t know their tribe refer to them as “Native American”.