When Clay first steps foot in to Stonehaven with Elena in tow. They are greeted by a totem pole in the foyer. Its old and you can tell dried out by the crack. He marvels over it. Elena attempts to guess “Haida” and he corrects “Haida Gwaii”. Which may seem petty to someone not familiar with Native american cultures of this region.   Haida Gwaii from my understanding refers to the formerly named Queen Charlotte islands which are off the coast of British Columbia. There are also Haida in south east pan handle of Alaska. Can you guess which animal is being represented in this totem pole? 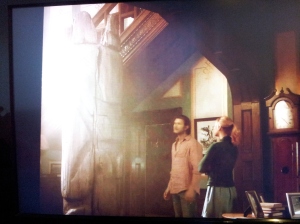 Syfy’s Bitten is based on the “Women of the Underworld” book series by Kelley Armstrong. I haven’t read this series so I can’t speak on the extent to which Bitten leans on native american anthropomorphism or mythology.   I can only speak for myself when I say that I hope to see more of these nods to Native American culture.