Complex may have beat me to the punch on this one.  I have been telling anybody who’d listen for a while now about how KidCudi is on the rise.

While he may have been painfully absent from some of the trailers. Kid Cudi is in the new Need for Speed movie. This is his first big screen debut. He stole the show when he appeared in How To Make it In American. He has seemed to maintain his sense of humor thoroughout the roles that he accepts.  He doesn’t seem as limited or afraid to take risks as say a T.i. I like T.i. as a rapper but as an actor his role selection seems to be centered around maintaining his cool.

I look forward to his next big break when Kid Cudi transforms into Ari’s Assisstant. Its not every rapper that can make the transition and take on serious roles. Wish Cudi the best. 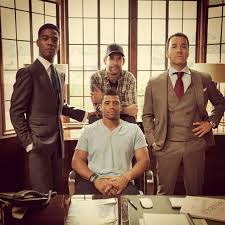